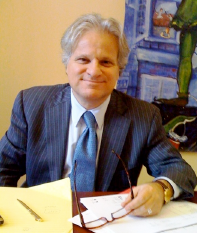 In February 2018, Bill Gertz was elected Chairman of AIFS, a leading organization in the field of educational and cultural exchange. In addition, Bill continues as CEO of AIFS, a role he has held since 2005 under the leadership of Founder Sir Cyril Taylor. Bill is a native New Yorker with more than 40 years of experience in International Education. He is a graduate of SUNY Binghamton, where he studied journalism and majored in European history. Shortly after college, he worked as a freelance writer, investigative reporter and editor. Later, Bill completed the Strategic Marketing Management Program at Harvard Business School and in 2014 received an Honorary Doctorate in International Relations from Richmond, the American International University in London.

Bill’s early career in journalism allowed him to cultivate a greater appreciation for global issues and cultures. In 1973, he spent the summer backpacking through Europe with friends. Greatly inspired by his travels, Bill then moved to France, where he was able to experience European life first hand. Upon his return stateside, he entered the field of International Education and in 1976, became marketing manager for the Council on International Educational Exchange (CIEE). Later, Bill founded a marketing and public relations company, which served clients as diverse as artist Peter Max as well as numerous youth and student travel organizations, including the British Tourist Authority. In the early 1980’s, he was the Travel Editor for Transitions, an international education publication.

In 1985, Bill joined AIFS as Associate Marketing Director. During his tenure at AIFS, Bill has led many initiatives that have been instrumental to the growth and direction of the company including leading it to its most successful years to date. In 1986, Bill helped AIFS launch the Au Pair in America program, which today is one of the largest au pair placement agencies in the world. He was promoted to Vice President of AIFS in 1990 and Chief Operating Officer in 1998 before becoming President and CEO in 2005, and Chairman in 2018. Total annual worldwide participants on AIFS educational programs, including Au Pair in America, Camp America, Summer Institute for the Gifted, Academic Year in America, Cultural Insurance Services International and College Study Abroad, are approximately 40,000.

Bill’s other major accomplishments at AIFS include the creation of a Customer Relationship Management system in 1993, the establishment of the first AIFS website in 1995, and organization of the Diversity in International Education workshop in Washington, D.C. in 2010. In 2017, he created and launched the Fearless Global Citizen campaign, a movement empowering youth to travel and embrace cultural diversity. Under Bill’s leadership, AIFS was voted the fourth best place to work in Connecticut for mid-sized companies by Workplace Dynamics and Hearst Newspapers.

In addition to his role as AIFS Chairman, President and CEO, Bill is a Trustee of the AIFS Foundation. Bill previously served as the Chair of the Alliance for International Exchange, a coalition of 90 cultural exchange organizations throughout the United States. He also served on the Executive Board of the International Au Pair Association (IAPA) and EDU Educational Services, Inc. and on the Development Committee of NAFSA: Association of International Educators. Active in the field of gifted education, Bill is a Trustee for the National Society for the Gifted and Talented, a non-profit organization and previously served on the State of Connecticut Board of Gifted and Talented Students. Bill served on the Board of Trustees for the Westport School of Music and is a trustee of the Cyril Taylor Charitable Foundation, a UK charity.

During his career, Bill has published numerous articles for educational publications including the IIE Networker Magazine and Youth Travel International and in 2015, co-authored the book, A Parent’s Guide to Study Abroad, which was published in both English and Spanish.

In 2019, Bill received the Institute of International Education’s (IIE) Centennial Medal, which honors the leadership and achievements of individuals that have made outstanding contributions to international education.

Currently residing in Fairfield, Connecticut, Bill lives with his wife Evelyn, a classical guitarist, and their dog Betsy. Their son Matthew is a Senior Fellow at MediaMatters.org and their daughter Susannah is a Recreational Therapist at New York Presbyterian Hospital. Bill’s personal interests include world travel, cultural writing and commentary; he also enjoys an eclectic array of music and movies.

Sometimes life can be simple: that’s why every year I have AIFS organize my study abroad program. I recruit students, I teach my class, and AIFS does everything else, and they always do it very well.

Why work at AIFS?
I wanted to thank you for everything you did to make my time as a full-time employee at AIFS as amazing as it was. I learned a great deal from watching you lead the organization. Primarily, I learned that if you take care of people and make them feel special and valued, they will perform well and stay loyal. With this, I think anything is possible.

Growing up with an au pair made me much more aware that there were cultures and societies other than mine. This had a significant impact on me specifically because I was exposed to foreign cultures at such a young age.

Study abroad is not merely a life-changing experience for those who pursue it; as the world becomes smaller, it is essential that our citizens understand other nations. To maintain our global leadership, we must give our students greater international educational opportunities.

Today, America's national security and our competitive ability are increasingly dependent on our relations and understanding of the rest of the world. Educational exchanges with foreign countries and the study of foreign languages are essential to our cultural diplomacy and an excellent way for young people to gain valuable experience that will aid them throughout their lives.